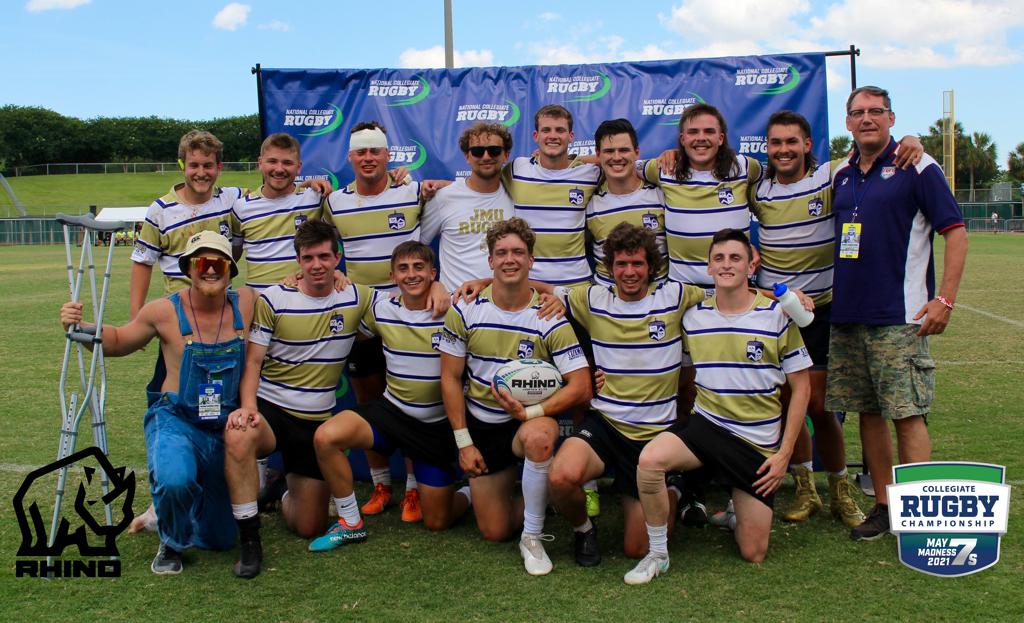 The Ed Hagerty Spirit of Rugby Award is given at the Annual Collegiate Rugby Championship to a team that best exemplifies the spirit of rugby through their determination and drive to achieve their goals no matter the challenges they faced.

For their spirit, CRC sponsor Rhino Rugby presented JMU with a POWA Portable One Man Scrum Sled.  The scrum sled is New Zealand designed, used by the All Blacks team and is made in USA.

About the Ed Hagerty Spirit of Rugby Award:

A decent club-level player, self-described as having “more enthusiasm than talent”, Ed Hagerty began his 14-year rugby-playing career in 1962, during the fall of his junior year at Holy Cross College (Worcester, MA). Playing as a loose forward, he served as captain of the Holy Cross XV during his senior year.

Following graduation from Holy Cross (June-1964), Hagerty moved to New York City. Shortly thereafter, he fulfilled his military obligation by joining the Army National Guard, serving the first six months on active duty, with five year’s of weekend reserve duty to serve. Returning to New York City after his six month active duty stint, Ed embarked upon a 12 year, post-college, rugby playing career. He played spirited but rather undisciplined first side rugby for the majority of his twelve year club tenure; first with the New York RFC (1964-67) and then, for a much longer period, with Old Blue (1967-75).

While his playing career had ended, Hagerty’s interest in rugby remained. During his tenure in California, he became involved, on a part-time basis (1975), in the publication of Rugby Magazine, which had been started by Jon Prusmack. Hagerty’s interest in Rugby Magazine, as a vehicle to grow the US game, increased as the months went by and in January of 1977 he was listed on the masthead as Editor in Chief.

He covered and photographed a large number of domestic and overseas tests, played by both the US Men’s and Women’s National 15s and 7s teams, from early 1976 until midway through 2010.

In 2018, Ed was awarded the Old Blue RFC “Club Spirit” Award. His long-time friend and rugby mate Mark Reilly remarked at the ceremony that "before there was social media, there was Ed Hagerty who became the voice/conscious of rugby in America."